Someone dumped a dog near a Missouri man’s house. And he got it all on video.

Glenn Blake’s security camera captured something we all know happens too much — but it’s still achingly hard to watch.

Yesterday, an SUV pulled up near Blake’s home, east of Springfield, MO, let a dog out and then sped off. You can see the dog give chase after the vehicle leaves the frame.

Blake later posted the video on Facebook with the following statement:

Person dumping dog in our neighborhood this morning 10 July at 10:13. Please share. I had no idea this video whould (sic) spread so fast and so far. Here is more information all in one place. This is at Farm Road 148 and Farm Road 205. Three miles east of Springfield, MO just off of Hwy D. The Greene County Sheriff’s Office was notified. Deputy Turner was able to locate the dog. At this point the poor dog was getting dehydrated and weak. The Deputy was extremely concerned and caring and provided the dog with water and comfort. The temperature reached 96 degrees today. GCSO called Rescue One https://rescueonespringfield.com/ and they promptly arrived to care for it. 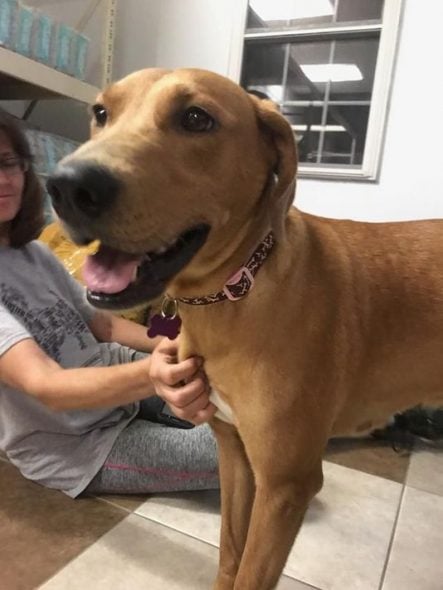 Here’s the pup, a female Lab mix. She’s now in foster care with the good folks at Rescue One.

As stated above, Blake got in touch with the Greene County Sheriff’s Office, which dispatched a deputy in response.

“Really, all the credit should go to Deputy Turner,” Blake told the Springfield News-Leader. “He went out of this way to find the dog, get a hold of it, get it cooled off and get it water. And the adoption agency (worker). Kudos to both of those people.”

He told reporters the deputy spent at least a half-hour tracking the dog and checking with neighbors to see if they’d seen her.

Once found, she was handed off to Rescue One, a Springfield-based dog rescue with a vast network of fosters. An emergency volunteer from the organization met the deputy at the scene. A rep for Rescue One confirmed the dog is now safe in foster care, though she was badly dehydrated and had suffered some burns to her paws from the hot pavement.

Knowingly abandoning an animal without making arrangements for its care is illegal in Missouri. The sheriff’s office is continuing to investigate.

“Somebody knows this person, with all the views the video’s gotten,” Blake said. “I’ve got a feeling that at this point, this person knows she’s been caught.”